As a Caterpillar dealer selling both new and used CAT equipment, Wagner Equipment holds an honored position. Historically speaking, Caterpillar is the New York Yankees of heavy equipment. Their innovation of replacing wheels with wooden tracks bolted to chains made the industry what it is.

Caterpillar stands for quality and value at a brand level – they own the industry like Kleenex owns tissue paper.

For your edification, here’s a brief overview of this outstanding American company. Its history is a story of business success Wagner Equipment is proud to be a part of.

A Name That Stands for Something

The Caterpillar Tractor company formed in 1925 as the result of a merger between the Holt Manufacturing Company and C. L. Best Tractor Company, but their memorable name actually came from events in the early 1900s.

The Caterpillar name is not, by the way, what most people today first imagine. Today our first impression is that the “caterpillar” is some cute brand mascot, like Mr. Peanut or the Pillsbury Doughboy.

Not so. This caterpillar is not a cartoon bug. The name stems from the continuous track system of vehicle propulsion, aka tank tread.

In 1903, Benjamin Holt, founder of the Holt Manufacturing Company that would later merge into Caterpillar Inc., paid for the right to use this type of propulsion under the patent owned by its inventor, Alvin Lombard.

Holt used the continuous track system on his company steam tractors to great success. At one point, a bystander watching the equipment work commented on how the machines crawled along like caterpillars. Holt loved the analogy and in 1910 trademarked the name to become the Caterpillar Tractor Company. In 1986, they officially changed the name to the current Caterpillar Inc.

A History of Success

Caterpillar is, in many ways, the ultimate behind the scenes worker. Nobody ever comments on the important role these tractors played in building the Golden Gate Bridge or the hero’s work they did after the 9/11 attacks.

Historical programs don’t focus on how Caterpillar heavy equipment supported U.S. military efforts during World War II. Nor do people consider that the US interstate system wouldn’t exist without these machines.

Today, nothing from high mountain highways to cities lined with skyscrapers could exist without CAT machines. This company helped build America.

Caterpillar did face a period of uncertainty. It started on October 29, 1929.

Caterpillar did post its first losses during the Depression. But they also made an important move to expand their product focus more on road building and construction rather than agriculture.

The timeline for this period shows how they got involved in projects that further established their dominance in the heavy machinery industry. 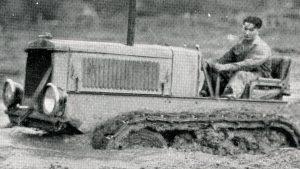 Russian Czars, famous explorers, A-list movie stars. Believe it or not, Caterpillar has historical connections to many famous people. They give a cool overview in this video.
Caterpillar products themselves have been stars, appearing in films like Aliens, Skyfall (James Bond) Hellfighters, and the classic silent film Man Power in 1927.

Today, Caterpillar makes tractors, trucks, loaders, excavators, graders, scrapers, and other heavy machines used in agriculture, construction, mining, logging, and industrial warehousing. Over half of all sales happen outside the United States.

Caterpillar is an international icon – in its own way. The equipment that gets the job done doesn’t get the same kind of recognition as the project itself, but behind the scenes, the importance of Caterpillar products cannot be overstated.

At Wagner Equipment, we are proud to play our small part in this impressive history. We are one of the leading dealers of Caterpillar equipment online, offering some of the best deals and service on both new and used equipment.

Be sure to check out our new and used tractor inventory, as well as consignments, parts and services, and rentals. If you have questions about Caterpillar equipment, our knowledgeable staff will have the answers. Contact us or use our website chat service.

We want to keep your company moving, to keep America moving, and keep the world moving. The modern infrastructure we now enjoy wouldn’t have been possible without Caterpillar. We’re excited to keep that tradition going into the future.